Charlie arrived at 31.2 weeks weighing in at 1.3kg. His parents were a 17 year old girl and 15 year old boy. Charlie was born with haemolytic influenza (a type of bacteria). By 3 weeks of age he started taking small amounts of formula via nasogastric tube (NGT, a feeding tube through the nose into the stomach) then by syringe in the mouth and finally sucking on a bottle. Almost immediately it became obvious Charlie suffered from severe gastro-oesophageal reflux disease (GORD), projectile vomiting almost everything. At 5 weeks of age he left hospital into the care of his grandparents under guardianship of the minister. His grandmother, experienced with reflux babies, went from doctor to doctor only to be told the same thing…. He’ll grow out of it at 3 months, 6 months, when he sits up, crawls, walks…….. But he only worsened. 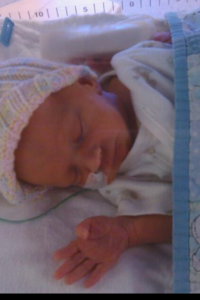 At 9 weeks he was rushed to hospital in a critical condition with encephalitis (a brain infection). He weighed 2.9kg. 3 weeks in a Paediatric Intensive Care Unit and 1 week in a general med ward saw him well enough to come home. His grandparents continued to care for him while still being told by doctors that reflux is suffered in some form by all babies.

Finally on his first birthday and having vomited constantly for 10 days he was admitted to hospital with Failure to Thrive (serious growth issues). He weighed 5.9kg. An NGT was inserted and the grandmother instructed in how to insert it at home when he pulled it out. Questions were now being asked about why Charlie couldn’t chew or swallow like a normal 1year old. He was stuck at a 6 month old in feeding ability. It was suggested that rarely does a baby 9 weeks with such a low weight come through encephalitis without a legacy. His hearing, vision, gross and fine motor skills appeared unaffected. It was looking like his legacy was chewing and swallowing. Suddenly doctors went into overdrive ordering video swallows (a type of x-ray of swallowing), barium x-rays, MRI’s, lactose tests, all sorts of blood tests………. But no one mentioned speech pathology as a possible way to teach him to chew and swallow.

Charlie was now 16 months old and fed 14 hours a day by NGT and by mouth the remaining time. He survived primarily on vanilla yoghurt as he felt, we believe, safe and secure with yoghurt. Finally his grandparents forced the issue and asked for further assistance for Charlie. He was finally assigned an infant mental health nurse, dietician and speech pathologist. But still the speech pathologist did nothing other than sit in on meetings. 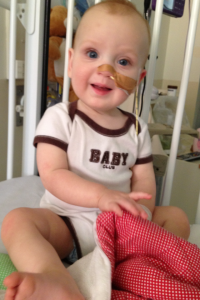 At 18 months and following several aspiration pneumonias (chest infections caused by fluid going into the lungs), Charlie was placed into an intensive feeding playgroup with 4 other children of similar ages and abilities. It finally became obvious to all that Charlie could not chew or swallow anything beyond the silkiest purée. While Charlie thoroughly enjoyed the social aspect of the group, it did nothing to encourage his eating.

Fast forward now to January 15, 2014. Charlie is now 20 months, has had a fundoplication (stomach surgery) to finally try and stop his projectile vomiting and he also had a gastrostomy inserted (a feeding tube surgically inserted directly into the stomach) so he could lose the cumbersome, uncomfortable NGT. It has been a long complicated recovery for Charlie. Charlie has been on this earth for approximately 92 weeks. During his ENTIRE life his grandparents made the 50km round trip to the Adelaide Women’s and Children’s hospital many times a week. He has a team of wonderful dedicated people including, paediatric gastrointestinal surgeon x 2, gastroenterologist, general medicine paediatrician, physiotherapist, occupational therapist, dietician, infant mental health nurse, child psychologist, HENS (home nutrition nursing support), stoma nurse, wound care nurse, infection wound care nurse, pain control nurse. Add into that our wonderful home visit nurses who allow us to have a break on weekends by visiting at home.

BUT, what’s been the missing piece of the puzzle until very recently? A speech pathologist. In April at age 23 months Charlie will FINALLY begin intensive speech therapy 3 x a week. His grandparents, while delighted, just wonder where their little boy would be now eating-wise if this had been offered earlier. Every day that essential services are delayed is time that the child can never recover. 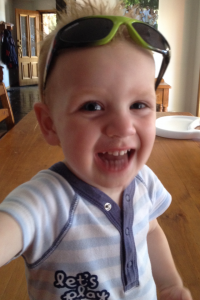 This is Australia and our children must have access to the best possible services when they need them, not when everything else has been exhausted. How do I know Charlie’s story? He is MY grandson and I am HIS grandmother. Charlie is so lucky to have someone like me who is able to stand up and fight for what he needs…… What happens to the children who do not have strong advocates standing beside them?

Back to March ’14 Newsletter