Oliver is our second child, a sister to Ella (you can also read about her story).

I was terrified that Oliver would have reflux, as we had gone through such a hard time with Ella. The decision even to have him was tough, as Ella was still suffering and we still weren’t getting much sleep. However, I told myself that if we waited until Ella was sleeping well, then we could be waiting years, so along came Oliver.

Right from the start Oliver was a chucker. I remember him choking and vomiting mucous while we were still in the hospital and 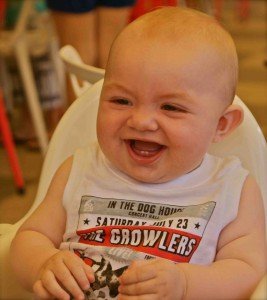 having to turn him on the side and put my fingers in his tiny mouth to try and clear it. This would happen at night too, the sound waking me up and I was scared he would choke and I wouldn’t wake up to help him.

I was determined that if Oliver did have reflux then it would be managed much earlier and much better, by both myself and the doctors.

When Oliver started crying after feeding and was difficult to settle I tried not to panic, but the fear had been well and truly put into me by our first reflux baby. I didn’t want to let him get to a point where nothing seemed to work, including medication, because the damage was already there and habits were formed. 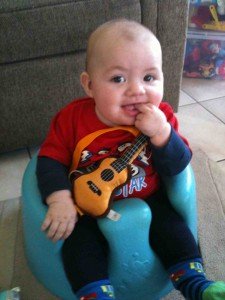 I was breastfeeding and this was very important to me. However, I also was more realistic this time. I had continued to breastfeed Ella even though we encountered severe breast refusal due to the pain associated with it. She had lost weight, I had developed post-natal depression and it was extremely distressing every time I was feeding her and so finally we stopped at 6.5 months. I was determined not to put myself or my new baby through this again.

Oliver had a bad latch from the start, with me coming home and immediately going out to buy nipple shields – which didn’t help at all. Nevertheless, I battled on, knowing how good breastmilk is, especially for reflux babies as it is easier to digest. I think I was in denial telling myself Oliver was just a “happy chucker” and the pain he experienced after a feed was just “wind”. By 10 days we had seen our paediatrician and at 2 weeks he was started on losec (an anti-reflux medication). At 6 weeks we saw our paediatrician again and I said the medication did not seem to be having any effect and he asked if I wanted to keep breastfeeding and I said “not if it’s going to be like it was with Ella”. He suggested Neocate infant formula which is an expensive prescription formula for babies who are milk protein intolerant (which is common in reflux babies). So I slowly weaned over the next 4 weeks to prevent the painful mastitis I had experienced 5 times with my daughter due to her constant breast refusal). 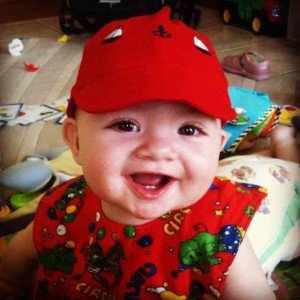 Was I doing the right thing? Did he really have a milk protein intolerance?, Was his latch really that bad? Was he just a happy chucker? Was I just panicking about what might eventuate?

It took a full 3 weeks to see the effects of being completely dairy free, and the combination of this and a higher dose of losec turned my baby into a sleeping, non-screaming, easy to settle, very happy baby! I finally had a baby that I had been told about, read about and wondered if they really existed! I then felt much happier with my decision to give up breastfeeding. It also made me really sad that my daughter had not had the chance to have a happy, pain free infancy.

So Oliver was now pain free by about 3 months old. However, he still vomited countless times a day and night! People would ask when it was safe to hold him if they didn’t want to get vomited on – there was no ‘safe’ time as he would vomit the whole 4 hours between feeds. Often I would pick him up from his cot to feed him again and he would vomit all over myself and the cot from the feed 4 hours previously. 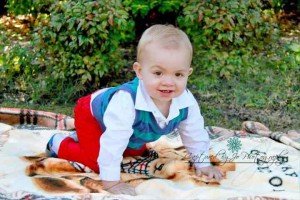 I was looking forward to trying solids as I knew this could help some bubs reflux. I waited until almost 6 months and started with rice cereal. Well this was a disaster, Oliver would refuse to open his mouth, he would turn his head with his mouth shut firmly. I assumed he just wasn’t ready so would leave it for a few days and try again. I tried with some fruits and vegetable purees and got the same reaction. The few times I managed to get the spoon in he would vomit it back up on the highchair. It was soon after that I realised he had an intolerance to rice. We were in the car about 3-4 hours after eating and Oliver forcefully projectile-vomited over the entire car. It hit me in the front drivers seat, his sister next to him and the front windscreen. If it was blood it would have looked like a crime scene! This happened again in a shop. His vomit hit the shelves with so much force it knocked toys off the shelves and when I went outside to tip the pram out after cleaning him up (well disposing of his clothes). It made a huge puddle on the concrete.

I stopped rice and spoke to our paediatrician who told me he may have FPIES. Either way, we were staying away from rice! He also 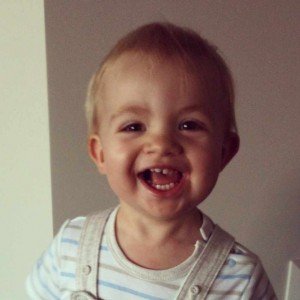 suggested we see a speech pathologist to assess and help Oliver start eating solids. It was quite hilarious at the time as he was a big boy and we got comments often about how he must love his food, when in actual fact he hated it and was eating very little!

We met our speechie and she was fantastic. She was great with Oliver and gave us lots of suggestions. Oliver was different in the fact that most babies with feeding difficulties have trouble transitioning from purees to finger foods, whereas Oliver coped with most finger foods but not purees. He would often hold the food in his mouth for a long time before he swallowed. Eating took a long time!

At about 8 months old, after I was getting frustrated with the time it would take to try and coax Oliver into eating, one morning he just opened his mouth and began to eat, and eat he did and continued too! It was like a switch had been turned on overnight. 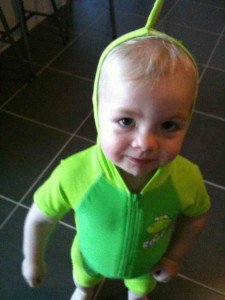 Our brilliant speechie continued to monitor his eating as he still was not great with swallowing, but much better. She also looked at his bottle skills. We slowly taught him how to feed himself his own bottle. It was very noticeable how much Oliver choked, spluttered and coughed when drinking. It was recommended we still thicken his milk for feeds even though the reflux vomiting had slowed considerably. Even with thickener our baby still choked which was scary to watch and manage. Looking back, Oliver’s poor latch when breastfeeding and poor suck when feeding from a bottle makes a lot more sense now.

Oliver had frequent bouts of bronchiolitis (he has now been diagnosed with early onset asthma, after 3 hospital admissions and countless courses of oral steroids). Our speechie was concerned that perhaps he was aspirating on liquids and this may in-part be causing his frequent chest infections. By this stage, he was off neocate and had tried soy formula and was now on aller-pro formula (not prescription, but the proteins were more broken down and is suitable for some babies with mild-moderate milk protein intolerances).

At about 12 months I started to trial cows milk in his cereal, he tolerated this well and very slowly I progressed to giving him bottles of cows milk. After a few months his reflux still appeared well controlled, but he got terrible nappy rash that would not go away despite the use of different steroid creams etc. He also developed eczema all over his body. After discussing with our GP, I stopped all milk feeds and within 2 days the nappy rash cleared up. I then stopped yogurt and slowly the eczema cleared up too. He is back on Aller-Pro formula until we see an allergist.

By the time he was 1 he was eating well, though still choking on liquids so we were thickening water as well. He was sent for a modified barium meal at the Children’s Hospital Feeding clinic at 14 months old. This showed he was not aspirating on liquids. However he was at high risk of this and it also showed he didn’t swallow in the normal way and had a delayed swallow. The feeding team told us they believed he had these swallowing issues due to the vomiting from the reflux (he had stopped vomiting by about 10 months and now was suspected he had silent reflux) and that the sensations had probably changed in his throat because of this. He had also developed different swallowing techniques due to trying to protect himself to limit pain. They recommended we be referred on to a paediatric gastroenterologist.

We saw the gastroenterologist and right away he suggested he do an endoscopy on Oliver as Eosinophilic Oesophagitis needed to be ruled out as this could be causing inflammation. He also stated that red flags go up for an otherwise healthy and developing child to still have swallowing issues at his age. He was pushed up the list and he had this done at 17.5 months old. The endoscopy was clear although mild changes to the white cells in the base of his oesophagus were noted by the pathologist (which could have been there from previous reflux damage).

From there we were told to trial a wean off his reflux medication. I had high hopes, apart from the swallowing issues he showed very little reflux signs. However, he started to vomit again within weeks and my previously perfect sleeper began to wake and refused his day sleep. When put back on losec this all changed again within days!

Next week we see an allergist, as one of the investigations into my children’s reflux and asthma was skin prick testing which they both tested positive in different areas for that may be triggers for them. Milk did not come up as a reaction which points to delayed intolerance, rather than an allergy. Nevertheless, we are hoping he is able to provide us with some more answers as we continue on this reflux journey.

Oliver is now 19 months old and doing well, apart from his reflux (which is well controlled by medication and diet) and asthma 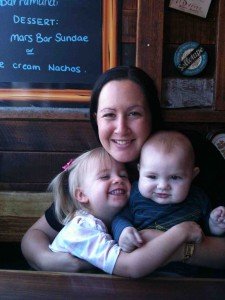 which is improving slowly due to the use of a daily preventer. He has recently become much better at swallowing liquids and is now able to drink without thickener added. We are currently attending an early language group to work on his language skills as often children who have feeding difficulties can have speech delay’s as their muscles don’t work as well. He is a major dribbler so we are also working on ways to get him to swallow his saliva. I have always called him my “easy reflux” bub but when I read back over what I have written, he really has not been “that easy”. However, I now feel we are on the right path, with a good team behind us. I am also learning to use my voice and advocate for both my refluxing children and now am able to help others through my work with RISA, which is a fantastic organisation that helps support families. I look forward to the day when I can say both of my children have grown out of their reflux, though that day may not come for awhile!

Back to Dec ’13 Newsletter